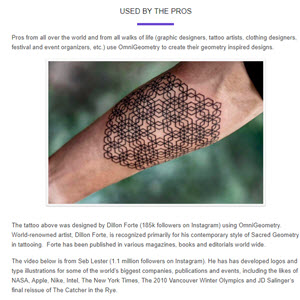 Geometry is the essence of this universe. Anywhere you see, there is a pattern that speaks of the greater truth and beyond. These patterns are a work of nature and they are the true artistry. We too can come up with spectacular recursive geometry shapes, however, as you know, we humans don’t have the capacity to create something of this intricacy in mere seconds.

That is only true if you’re doing it by using mainstream software such as Photoshop or Illustrator. The time doubles or triples if you’re doing it by hand. As compared to this, OmniGeometry has the speed and accuracy you need to create sacred recursive geometrical shapes that reflect the perfect foundation in nature.

This is a software, but not just any software that takes all of the space on your hard drive and gives your machine a tough time. It can be smoothly run in a browser and it won’t compromise on its functions at all - you know how the new HTML 5 browsers work wonders.

Coming to the core of the software, it specifically employs the art of recursive geometrical shapes. There are basic layers and their parameters (40 in numbers) that can be edited, changed instantly to suit your purpose, which brings us to the fact that

The matter of a few seconds

The dashboard of the software has been designed keeping the desired simplicity of the customers in mind. All of the options presented therein are so easy to use that even a beginner can use them to create intricate designs in no time.

The best part is that it does not stop in creating recurring designs. The possibilities with it are limitless, which means you can come up with infinite designs with mere touch of a button.

The programmer behind it has managed to render such depth to the whole process that it can work with the intricacy signature of recursive designers - even better than them. The edge this technology has given OmniGeometry is that of time.

For example, if you have to create a design that has an initial 8 points, the next level would require you to create 64 points, the third 4096, and so on. Maintaining detail and accuracy in such cases becomes difficult manually. Even if it possible for some, the amount of time taken would amount to nothing less than unbearable.

OmniGeometry, on the other hand, can create this design in less than 5 seconds and 4 clicks.

OmniGeometry is versatile in a sense that you can export your work either in a PNG file or PDF.

The PNG file is mostly useful for resuming your design later in either Photoshop or Affinity Photo. On the other hand, the PDF can be used in presentations or general printing.

Both of these vector exporting methods are unique in their own ways, but what’s common between them is their ability to contain the intricacy of the design with sheer details. Every layer, every point is spot on without any redundancy and this is what makes the designs created by OmniGeometry sacred.

OmniGeometry does not only create sacred designs, but it also brings it to life through animations. The layers can be scaled, rotated, have their colors changed, and perform other basic to advanced animations quite quickly.

Creating these animations could be of particular importance in displaying trancelike patterns during a music festival or otherwise.

Capturing these videos is easy. You only have to record the video by using screen recorders. The exclusion of a local video creation feature makes this software apt for browser use and blazing fast.

After the animation, the second most striking feature of this software is tracing. You can create stunning color patterns by using this option. It basically creates a layer over the already present animation and the convergence of both lets the magic happen.

How is OmniGeometry better than the rest

OmniGeometry projects’ turnaround time is unbelievable as compared to the rest of the ace software. As we said earlier, it only takes 5 seconds to create a multi-layered recursive design.

Other than this, the technology behind it helps you stay in the flow. For example, you can work with bitmap static designs as well as intricate vector shapes all together in a single organic interface.

Sakari Lehtonen - the creator of this software has indeed used his time tested and trained in developing and developing skills to come up with a masterpiece. Furthermore, his knowledge of automation engineering shows itself in the recursive features of the software. 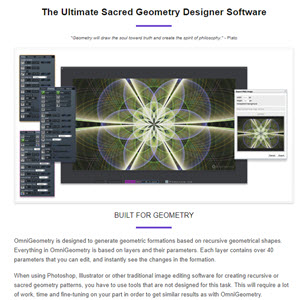